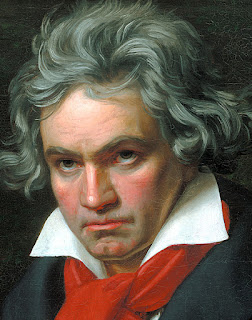 Born in Bonn, Germany in December of 1770 (The 13 colonies were still part of the British Empire)-- Beethoven
re-defined what it meant to be a musician during his lifetime.
At the time he was born, most musicians were in the employ of wealthy patrons who controlled what they created --
by the end of his life, Beethoven demonstrated that it was possible to create music that satisfied the composer
and audiences would be happy to pay to hear it.

His music is among some of the most well-known in the world. He wrote for voice, piano, orchestra,
and many solo instruments. Listen to the following:

Ninth Symphony (the theme you know begins at 1:06:30-it's over an hour of music!)
Newly Completed 10th symphony using AI
Rage Over A Lost Penny ( Humor from Beethoven)

Be Sure To Leave A Comment With Your Name.  Without a doubt John Williams is one of America's best known composers. He was born in 1932 to a musical family- his father was a percussionist (instruments that you strike or hit like drums).  He studied music in college and played in the US Air Force band. He started writing music for movies in the nineteen fifties. When he was 29 years old he won his first academy award ( one of many) for the movie "Fiddler on the Roof". He then wrote the music for "Jaws" winning another academy award. His most well known work is the music for "Star Wars" - this is music that is known around the world! He also wrote the music for the Harry Potter movies! Here are some examples: Schindler's List Indiana Jones Violin Concerto #1 (created in 1976) Jurassic Park Cello Concerto (1997) The Fiddler on the Roof Violin Concerto#2 ( composed in 2021) Interview with the composer
Read more

Remember to leave a comment. Caroline Shaw was the youngest recipient of the Pulitzer prize in 2013 at the age of 30! Her winning composition is titled: Partita for 8 Voices  (click the link to listen, Ms. Shaw is one of the performers) She is from North Carolina, and like many other composers, including Beethoven, her first teacher was a parent (Mother). She began playing the violin at two years old and composed her first music at ten! Interesting fact: Kanye West has used her music on one of his albums. Here are some more examples (they are really interesting): String Quartet Music in Common Time (very beautiful music) Its Motion Keeps (music for children's choir)
Read more

Please remember to leave a comment During her lifetime (1819-1896), Clara Wieck (Schumann-she was married to Robert Schumann another musician) was known as a concert pianist--in fact, she was considered one of the greatest pianists of her day! As a child, she gave her first public performance at age eight, and at the age of eleven, she toured all over Europe. Since she performed the music of other composers, her own compositions were not often performed during her lifetime. Today, Schumann's music is very well known, and now you know her music too! Here are a few examples: Scherzo in C minor Nocturne Trio (music for violin, cello, and piano) Concert Variations Piano Concerto in A minor (this is a lengthy selection- the first few minutes will give you  a taste) And if you really enjoy her music here are the complete works for piano! (over three hours of music)
Read more